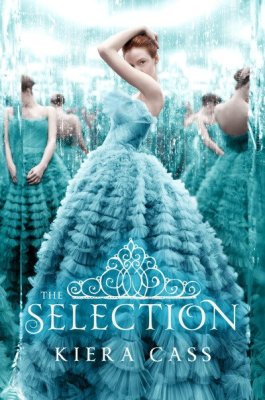 The Selection by Kiera Cass

“I’ve met nearly every woman in this room, and I can’t think of one who would make a better friend. I’d be glad to have you stay.”

My relief was inexpressible.

That’s right. I finally read AND finished The Selection. In seven hours. Yeah.

Despite my stiff limbs and droopy eyes, thank God for 14 hour road trips!! The Selection was definitely a good read to pass the time. The only real problem I had with it was some confusion. I was lucky enough to meet her and three other authors at a M&G at my local bookstore back in May. She said that her books — or maybe some people described it this way? I can’t remember — are like the bachelorette (Or bachelor? Ha ha I don’t follow those shows and their titles deceive me) mixed with the Hunger Games. So in my mind Panem literally goes District 1, 2, 3, 4… etc in order like a line (SO not the case) and so I guess I picture Illéa like that but with the castes being in order. I swear it confused me the whole time but that’s my fault hehe. Anyways, other than that I really liked this book.

There are some bones to pick with this book, but I have hope for the sequel. America is definitely an interesting character. When I met Cass she talked about how she loved the name America and then she realized that maybe it ended up being a symbol. I definitely see it that way if she hadn’t thought of it anyways. In this world of futuristic monarchy (people don’t see this as plausible but seriously Cinder had a monarchy… I think. I’ll double check 🙂 ) and intense restrictions, she still believes in the old ways of the world. She believes in freedom of sex (yeah there’s a law against pre-marital sex. That doesn’t sound like it would go over well but I think it may have a greater meaning later on…) and freedom to marry who you want. The latter definitely lays on the fact that she is in love with a boy in a caste lower than her. Aspen. Oh Aspen, I loved you at the beginning of the book but gosh dang it! He too pigheaded for his own good. America also believes in being able to provide for her man once in a while because he does so much for her and they date in secret! For crying out loud, he gives her a penny each time she sings for him though he can’t afford it. Of course the second America gets money and makes and extravagant (as extravagant as a Five can do) and he shows up he totally goes ballistic.

I can’t do this. We need to break up. You can’t be poor with me. OMG no. Stop being nice. Noooo. Goodbye America. I love you.

Seriously? He is so chivalrous and too worried about his pride that he’d break up with her when she tried to spoil him ONCE? Then I lost it for him. Of course America entered the Selection for him — and the incentive of money from her mother. America was ready to give up the not-too-fantastic-but-not-as-bad-as-Sixes life of a Five and become a Six. A servant instead of a musician/artist. Maybe it’s the feminist in me — which isn’t a very big part — that was like Aspen if you can’t let her reciprocate don’t let the door hit ya on the way out. So she enters the Selection and she gets it.

But can we all be honest? That was obvious 😉

One thing about America. She is too… on the I’m not pretty boat but then she’ll turn around and say things like “It made me feel pretty.” CHOOSE!! In fact she’s too against believing she’s pretty that it’s kind of annoying. Luckily it died away quickly. Ish. 😛

So America gets chosen and she has to go to the capitol for the actual “game.” America hates attention but definitely loved it when she stopped for 20-30 mins to talk to fans. I did have one question. You were chosen a week ago… how do you have fans? But that wasn’t something to dwell on too deeply.

One thing I do wish Cass would have done is give the other girls more depth. Especially ones that were there the whole time. Her maids, her two friends, even Celeste.

Anyway she shows up at the caste/palace/mansion and meets the other girls in the dressing room for their first meeting thing. America is a brick wall against changing for anyone. Ain’t no one gonna paint that brick wall a different color for the new neighbor across the street. She isn’t afraid to tell anyone how much she is against changing for the “spoiled, stuck up” prince. so naturally she goes natural 😉

Later that night she has a panic attack and nearly passes out when Prince Maxon comes to the rescue. Talk about a knight in shining armor. Now, I love Maxon, but he could definitely use some more depth. We learned a little about him but not enough in this book!! Though he opened up for America it seemed that she told more than he did. I get it, all alone in a castle not much to do or tell, but still. Maxon definitely was your prince who wanted to have some fun. More importantly, he needed some cold, hard honesty. America never hesitated to give him that. Till the end (But I’ll let you who read it see if you know what I’m talking about). I could tell he like her from the start. America was fiery but shy. Maxon was calm but outgoing. They definitely balanced each other out.

America wanted to just be friends with him but that ship only had to make it down the coast to More Than Friendsville. Detour to I Like You Now City.

As the Selection part of the story grew and got closer to the narrowing of the girls, an underlying rebellion was attacking. Hopefully Cass will tackle this part of the story more. I love dystopians even if the main line is a romance (Shatter Me series) but you definitely need something more and need those details of the mundane problems to keep the story alive. Without that the series is an extended love story with a little bit of problems. It would take a lot to keep that interesting.

Speaking of love stories, like all series now (or ever) there is a love triangle. I usually don’t mind love triangles, I love picking between the boys and then seeing if one is stupid and betrays the heroine, but I am too against the third person in this love triangle. Aspen. It’s too forced.

When Aspen showed up at the end and begged for America back… then she took him back fairly easily? PLEASE. He totally broke up with you out of nowhere and didn’t speak to you and then he comes back and you’re like ok. I love you too let’s make out. No, no, no. NO. I would get it… you still love him, but that doesn’t make everything okay. I think that if it was reality that he wouldn’t be taken back so easily. I would make him be sorrier than for five minutes. *Eye roll*

Anyway, I really did like this book. With every book, there are kinks and small things that I can and will pick at. I can see these characters growing in the next book and I hope I’m right. America and Maxon have a long way to go before I can definitely ship that (but I do secretly) and she needs to dump Aspen like last weeks trash ugh. I can’t wait to start the second and see this story grow more. All the reviews are so on opposite sides it’s easy to choose one or the other. I think I’m leaning with love it.

Good night and have a fantastic rest of the weekend!