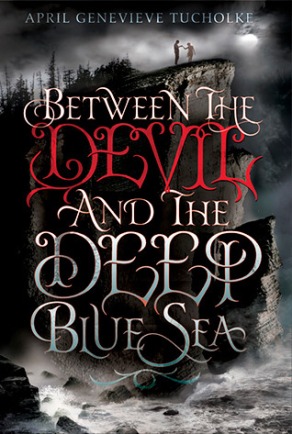 River’s kiss tasted like coffee and storms and secrets.
And slowly, slowly he began to move faster, and then faster…
And then he stopped.
River let go of me, just like that. Just about the time I’d forgotten who I was, just about the time I’d forgotten we were even two separate people anymore and not just one glowing, quivering, ocean of kissing… he let me go. He stepped back and took a deep breath.

*Spoilers will be in this review*

With this book I did something that I haven’t done since I discovered Goodreads. I didn’t look up the rating and I didn’t even try to snoop on it at all. I had one of my friends pick out a book for me at random in Half Price Books (one that she wanted me to read and of course she knew the rating. She taunted me with it while I read the book) and I vowed not to look at it. I wanted to be completely blind going into the book.

And it was great. I loved it. Imagine my shock when I saw that it was a 3.6 out of 5 on Goodreads. Normally I don’t go below maybe a 3.8, and that’s pushing it. Books below that are foo-foo and just cheesy. But now I know not to always judge a book by its rating. Once I read a book called The Boy Who Sneaks in My Bedroom Window and it had like a 4.2 (it has a 4.00 right now) and it totally does not deserve that rating. If I knew better, I would have looked up the fact that the author is a Wattpad author (fairly sure self-published. Red flags there.) and I had read one of her books years ago. Both stories had pretty much the same plot lines but different ages. If you want to read that book then don’t read the next sentence, skip to the next paragraph. BWSIMBW: Girl has abusive father. Brothers friend protects her. They grow up. Girl doesn’t like anyone touching her except boy brother and mom. He falls in love. She doesn’t know. She falls in love with boy. Girl gets pregnant. Father comes back. Father kicks the hell out of the girl. Girl has miscarriage. Boy loves her anyway. Happily ever after. The other book she wrote that I read was called Nothing Left to Lose. It went a little more like this: Rich girl gets kidnapped. Father finds girl. Girl doesn’t like to be touched. Father hires bodyguard. Bodyguard spends a lot of time with girl. He falls for girl without realizing it. She falls for guard. She gets pregnant. Kidnapper comes back. Kidnapper kicks the hell out of the girl. Girl has miscarriage. Guard loves her anyway. Happily ever after.

Is it just me or is girl a word anymore? But you can see how I found out those two books were by the same person. There was almost no difference except the circumstances. But Deep Blue Sea taught me that maybe the ratings don’t define the book.

And I loved it. The writing was interesting. I could predict some of what was going to happen in the book so maybe that is a downfall of it. Other than the predictability I got hooked.

I never truly fell for River, well until the end, and that was because he was such an odd character. He was always lying and doing all these things and It was just annoying. You wanted the truth from him. He could be so aggravating especially how he used his powers and you never could tell when he was clouding Violet’s thoughts.

Violet was great. I enjoyed her personality. She was this loner, bookworm, who loved to wear her grandmother’s clothes and hang out and explore the attic and other creepy places in town. She was explorative and even though she knew when she shouldn’t, she still did.

I’m looking forward to the next book. In fact I just ordered it (and two more. I have no limits, guys.). It should be here at the beginning of July which I am stoked for because I also ordered Red Queen and Dragon Marked. (If you’ve heard about the last one let me know. I saw it on Goodreads but I’m curious.)

Now, I need to get back to reading Clockwork Prince. I got a chunk of it read last week in Florida so hopefully I can finish this soon. It’s been like a month. It’s bad.