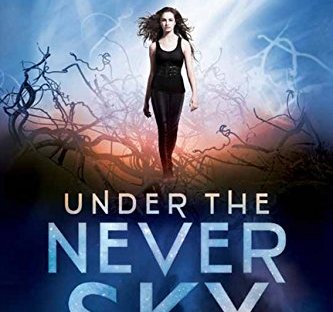 Under the Never Sky by Veronica Rossi

Published by HarperCollins on January 3, 2012

She looked up. “A world of nevers under a never sky.”
She fit in well then, he thought. A girl who never shut up.

To jump start my never-ending reading slump, I wanted to revisit this series since it was something I’ve thought about for a long time now. I read these for the first time back in 2013 and I am so glad I picked it back up. Not only is the book still good, but it’s addicting and I read it in only a couple days.

The first time I read this book, I read it in one day. If it wasn’t for adult responsibilities, I definitely would’ve been able to do that again. This is one of those books you just melt into and before you know it you’ve read 100 pages in what seemed like five minutes.

Under the Never Sky has everything I need from a book. A great plot, a fantastic world, and plenty of angst and longing that has me smiling behind my mask on public transportation.

I remember the series being really amazing but sometimes books you read at 16 don’t hold up well. I was worried this one would fall short for me, but I have the sequel downloaded on my Kindle so I can read it first thing in the morning.

Under the Never Sky follows Aria who is forced into the Outside in search of her missing mother where she meets an Outsider named Perry. He helps guide her and they learn a lot about each other along the way.

If you enjoy the Arcana Chronicles I think you would enjoy this series too. There’s some elements that they share. Apocalypse, cannibals (ugh, yes but not graphic), and handsome tough guys to help guide us through this unknown world. Plus this world has Aether storms that are threatening to the health and safety of everyone. I imagine it as lightning storms but worse. For the sci-fi tech lovers, there are elements of the technology I found relating with Warcross. Truly ahead of its time this book was.

With this destroyed world, presumably by humans, I think often about how not too unrealistic of a future this could be. The technology of the Realms and eye patches made me think back to Warcross and the Neurolink which is something tech companies are working on currently. Then when you add in climate change making this world more dangerous for us to live in everyday, I can see a world where who knows how many decades from now people could be living in a similar reality to this book. In 2013 I definitely didn’t think this would be some alternate future for us, but that tells you how quick things are developing.

Reading this again, I thought I remembered more about the series than I actually do. I know about 4 plot points, 2 occurred in book one so who knows where the other two land in the series. It was all the joy of reading a new book but the comfort of knowing I was going to enjoy it.

The romance in this book is perfectly balanced with the pace of the story. It isn’t shoved in your face and it is developed over time instead of a love-at-first-sight situation. You get to know the characters for who they are and see how they warm up to each other first.

If you’ve never read this series, I highly suggest reading it. Not only is it easy to sink into, but it also takes me back to a simpler time in YA when dystopias were all the rage.